Recent archaeological theories suggest that Rock Art depicting hands (often dating back 35,000 years!) which can be found all around the world was in fact a physical mark by prehistoric woman to remind her community of a tangible connection with the divine and thus depict the origins of “belief” by humanity.

The caves themselves were liminal places of ritual and the rock walls were, when in trance, a veil between this world and the Other. Archaeologist David Lewis-Williams suggests that rock art symbolism is a result of trance, and that trance is a universal, physical process; neuropsychological studies of trance (or deep, active and conscious dreaming) show that the neurological experience is and was the same for a Paleolithic woman as for a “modern” woman.

Lewis-Williams created a model of 3 stages to test that rock art originated from trance:
1. Entoptic patterning, that is geometric light patterns within the optical and neural systems (entoptic – meaning “within the eye”)
2. Visual pattern recognition, influenced strongly by personal, social, environmental and cultural conditions
3. Full blown hallucination with a sense of participation and becoming the thing you hallucinate

As an artist, like the rock artists of prehistory, I feel that it is crucial for me to manifest and make tangible my “hallucinations”, which at times create a bridge of connection with something Bigger – certainly connecting me to a Creative Power – and at times give comment on the world as I experience it. Kandinsky advised artists to turn away from painting merely what they see, urging them to paint from their inside selves. The “outside” that I express in my art is filtered through my inner world and expressed often in something that appears to the onlooker as something more akin to a dream. 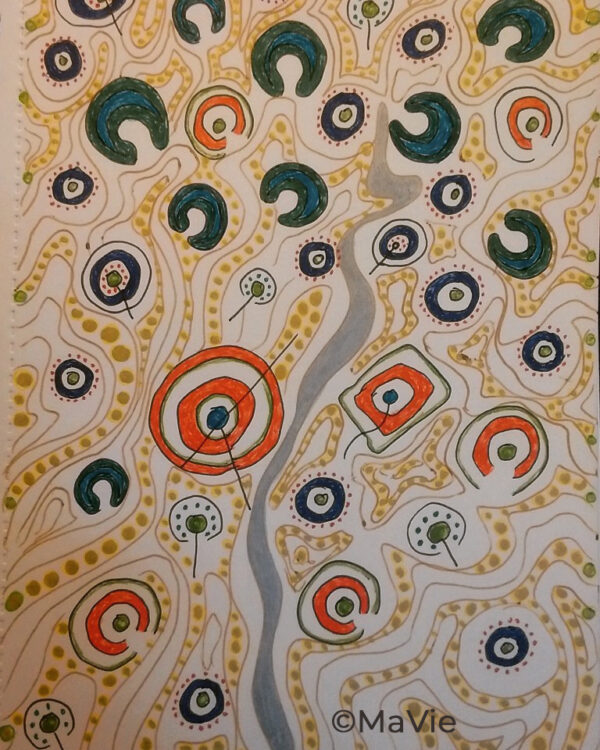 Signs along the Way
Pen on paper, nfs

in the halls of modern art we hear cries of “I don’t understand it!” and “What a waste of space!” and “how much for that shit?”

Snakeskin in the Undergrowth
Pen on paper, nfs 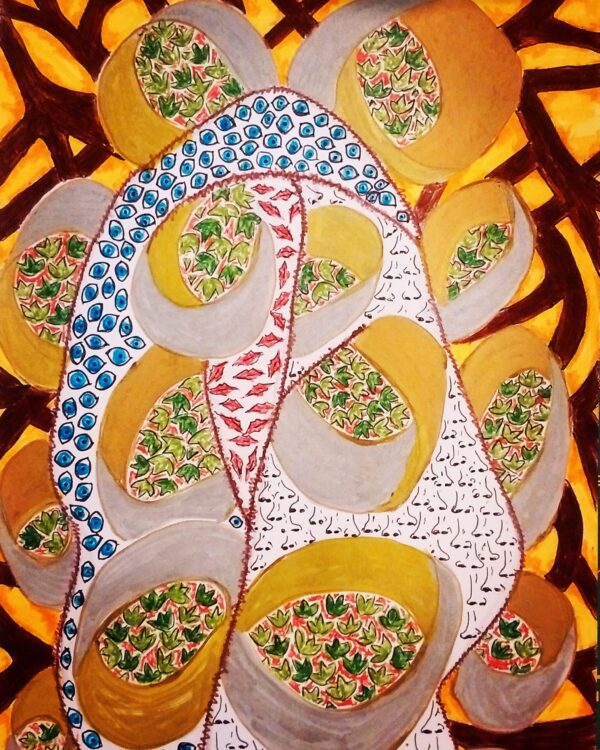 The Forest has a Thousand faces
Pen on paper, nfs 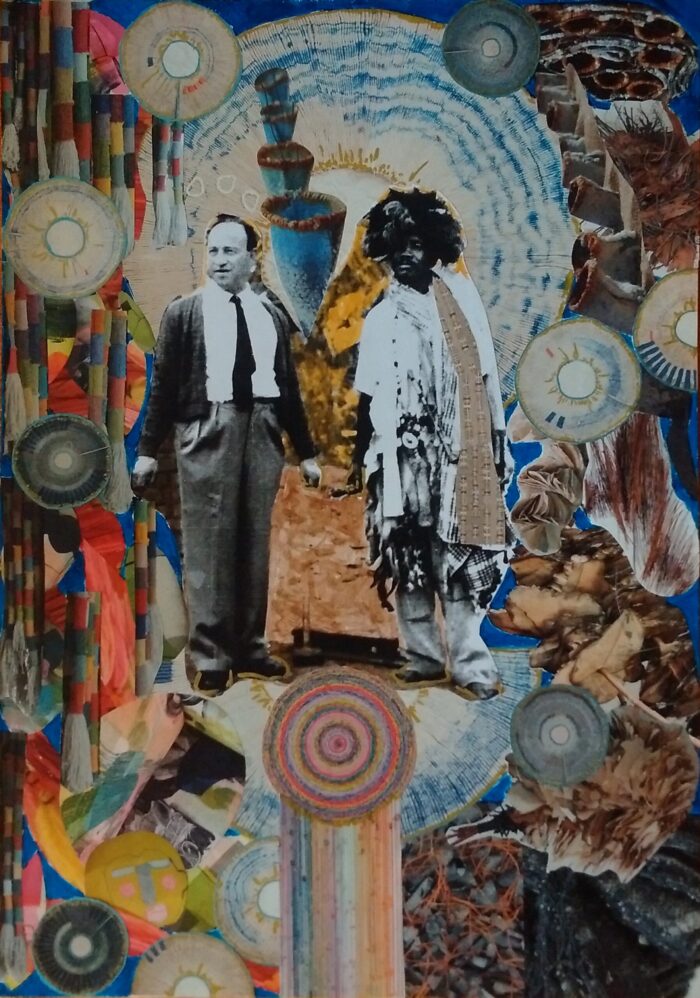 These two men are both doctors. The white, Western trained doctor undertook to study the so-called local “witch doctors” (a term he abhorred and which was forced on him for sensationalising purposes by his publisher) or Nganga, to see what he could learn to help his patients locally in Rhodesia at that time. Unlike so many accounts in the 1960s, this doctor treats the Nganga as colleagues and equals.

What appeals to me so much about this image is the way the two men are precisely mirroring each other’s body language, down to the loosely held fists and angle of the feet. Such mirroring points to an intimacy and ease of friendship.

In my Social Anthropological studies I encountered many anachronistic texts and tomes that treated whatever group being studied as inferior and merely a stopping point on a line of evolutionary progression towards everything that the “white Western man” represented – savagery progressing towards civilisation.

Yet so-called “civilisation” has brought us extreme disparities between social groups, generally based around wealth, consumerism and education; any sense of community is fractured, split between the haves and have-nots. Factory-farming and modern slavery indicate just some of the cost to innocents for our convenience. And our connection to Mother Earth is one of active and wilful destruction.

So who’s the savage?

Perhaps we could learn through relationships of collaboration as between these two doctors/healers to re-connect both with each other, creating communities again, and with our First Mother, the Earth.

In Jerusalem people put their prayers onto folded up pieces of paper and cram them into the crack in the rocks of the Wailing Wall; traditions around Europe find such prayer papers stuffed into trees or under rocks… Yes, the prayers may be directed to a Greater Being, but we still choose rocks and trees as our intermediaries to hold and carry our prayers.